A retired mom and grandma making even more time to enjoy the beauty that surrounds. View all posts by Denise

A rest day is always welcome. And where better to spend the day than lazing around a hill top hotel overlooking one of the most spectacular views in Tuscany. As with many of these establishments located on vast acreage, the pasta served was freshly made as was the honey, as this is part of their own industry.

Leaving was a bit difficult but knowing that the first part was primarily downhill was certainly an incentive. The Tuscany region once again did not disappoint with its smell of the pine trees, gentle rolling hills and intermittent gravel roads, you truly feel one with nature and the environment as you pass along perfectly manicured vineyards and small towns on the way.

We skirt off course momentarily to visit the Monte Oliveto Maggiore. This is a large Benedictine Abbey located just 10km south of Asciano. The monastery is accessed through a drawbridge which leads to a medieval palace in red brickwork. This structure began in 1393 and was only completed in 1526 and restored in the 19th century. After the entrance you are greeted with a long alley lined with cypress trees surrounding a botanical garden. Strolling through this peaceful place calms you and at the same time energizes you for your journey ahead.

Asciano is a small town with just about 7000 inhabitants. Typical of Tuscany’s history Asciano became the centre of attention between Siena and Florence in the 13th century eventually being won over by the Sienese after the bloodiest battle in the Italian medieval history in 1260.

As usual we arrive at the hottest time of day when all are indoors and the place is quiet and filled with an eire atmosphere. Later in the evening, we are thoroughly entertained by our multitasking receptionist, come bar man, come chef, as he Kariokes the evening away to our personal enjoyment. 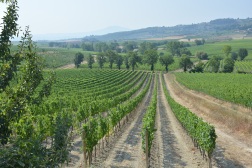 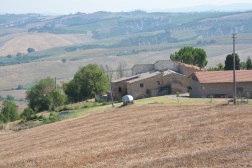 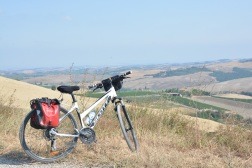 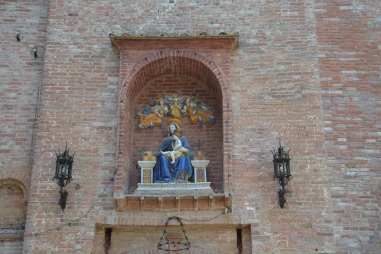 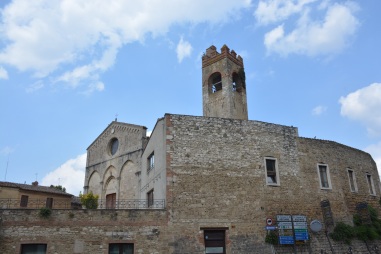 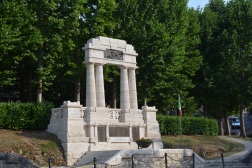 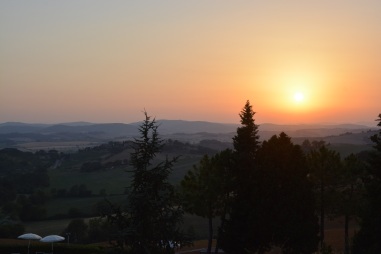